Most Visited Tourists Place in Dhaka 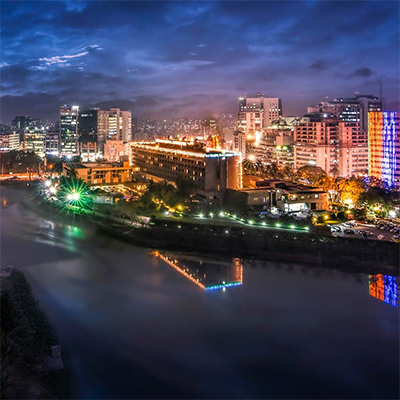 DHAKA; the core of Bangladesh (i.e., also known as the Heart of Bangladesh). Being the most bustling city in Asia, Dhaka is still the most flourishing and congenial city in Bangladesh. As Bangladesh is an ongoing developed country, there are plenty of visiting spots within the main cities with a different culture and engaging environment. The first impression an outsider gets once they enter Dhaka is the chaotic and noisy City. Yet, this buzzing city has many fascinating travel spots that amaze every person who visits there. This is why those places are now the most visited tourist places in Dhaka.

Besides, here in this article, you will get all the details about those places. Therefore, if you are planning for a tour, this article will be the tour-guide for you. Let's dive deep down the content and read till the end to know every place very well.

Dhaka isn’t a small city at all. This is why there are a lot of attractive places you can visit. But make sure you start with the places I mentioned down below. It will definitely galvanize you more to experience Dhaka more.

Bangladesh is mostly known for its greenish environments (i.e., plants and animals are the most attractive priorities). And the National Zoo is a part of that which holds every glimpse under one umbrella. Bangladesh National Zoo was established in early 1974. And it has over 2000 animals of 165 different species with all the greeny plants surrounding it. The best part is the Royal Bengal Tiger (the icon of Bangladesh) in this Zoo. It also includes many foreign and local wildlife assets, birds and animals like lions, elephants, zebras, cheetahs, black bears, and many more.

This Zoo is so big that more than 8,000 people visit this place every day. It covers the land with 75.53 hectares, which holds a lot of crowds every holiday or weekend. Therefore, if you aren't a crowd freak guy, then this place is not for you on weekends. But it would be the right choice if you visit there during working days.


2. House of the National Parliament

Being a citizen of Bangladesh, the most favorite place of mine is the National Parliament. The first thing on the list of my weekend work activities; is to pay a visit to the National Parliament. It warms me up and makes me more active for the entire week. This entire National Parliament is designed by the most reverent and well-known designers, Louis Khan and Muzharul Islam, during the early 20th century. The construction work activities of this Judicial Complex started in early 1964. But the Liberation War halted the construction, which was later completed in 1982.

Bangladesh National Parliament is the largest judicial complex in the whole world. It includes three parts: the Presidential Plaza, Main Plaza, and the South Plaza. Besides that, the MP Pension is situated on the outer side of the Parliament. On the other side, a vibrant and eye-catchy artificial lake adjoined all around the Parliament's main building, making it look more ravishing. And that lake road also has a monument of our early Prime Minister Ziaur Rahman. If you have plans to visit the National Assets of Bangladesh, make sure you pay a visit to the Bangladesh National Parliament.

When the Armenians left Dhaka, this Church was falling off with doors being shut. But luckily, a few of the generous merchants revived this Church by contributing to this Church and renovating it. Due to this, this Church is now a lovely place for every tourist as a tradition. Now, Armenian Church has a lot to explore, that include: its rectangular shape, unique arched doors, gates and windows, spiral staircase, and many more. If you don't go there, you won't be able to experience Bangladesh's ancient creations. So this is definitely a place every tourist should visit.

Bangladesh is best known for its river geological formation. It is a riverine country. Due to this, the crops, vegetables, trees, and fish of this country are relatively fresh. Besides that, a lot of Bangladesh's economy depends on these rivers. There are plenty of historic ports to access all these rivers. But the biggest one is the Sadarghat. The name itself has a mystery, do you know it? "Sadar" meant the term City, whereas the "Ghat" refers to the Wharf. Instead, it is also called the "Stairs Leading to the Water."

This Wharf is used to access the Buriganga river. And there are many river vehicles to transport on this river —E.g., car ferries, rowboats, passenger ferries, ships, wooden boats, and many more. Furthermore, Sadarghat is also the busiest river port all-around in Bangladesh. Will you believe me if I say, this port transports millions of passengers and cargo every year? Yes, it really does. And being the busiest river port, Sadarghat destroyed the Buriganga River with Human and Industrial wastages. Well, this is regretful for Bangladeshi Citizens.

Ahsan Manzil was later named after Nawab Khwaja Ahsanullah, son of Nawab Khwaja Abdul Ghani (known as the Bengal Zamindars) in the early 1846 to 1901, in Kumartuli. Ahsan Manzil was built in the Mughal Emperor period. The place where this palace was built was once named Rangmahal. Here people used to entertain themselves in many ways. Rangamahal was constructed by Sheikh Enayet Ullah. Sheikh Enayet Ullah was to be the most fantastic person early at those times. He used to bring females overseas and make them wear fancy dresses and ornaments to entertain people who visited Rangamahal. This place became a dead ghost, which only holds historical assets that tourists enjoy while visiting that place. So why not, you also be one of those tourists.

Dhaka represents Bangladesh as the most crowded city in Asia. Indeed, many people (mostly outsiders) know very little about Dhaka, which prevents them from visiting this place. But once you see Dhaka from end to end, I believe you will permanently look for accommodations to stay in Bangladesh. This article was right for those who have no ideas about what to visit in Bangladesh and its heart "Dhaka." As you have gone through the details of the top 5 most visited tourist places in Dhaka, so why are you waiting to experience them live with your own eyes?